Lately, I’ve had weddings on the brain, an it’s no wonder why. I may have mentioned it a million times that my cousin is getting married in June, and my sister is getting married in July. Everyone in my family is really close, so that means that over the past two months, we’ve either been shower planning, buying shower gifts and/or wedding gifts, and attending showers.

First, we had my cousin’s shower.

Me with my cousin Kristin, my Grammie, and my sister (in the scarf – she had just had ear surgery)

Then, future brother-in-law’s aunt threw a shower for my sister: 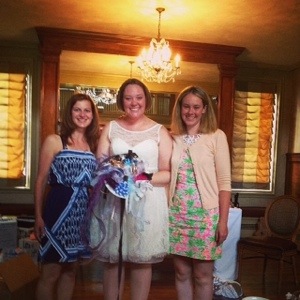 Me with my sister (in the middle) and her future sister-in-law (who is also a runner!)

And finally, I threw a shower for my sister to celebrate with our side of the family:

(Left to right) Me with my sister, cousin Sarah, and cousin Martha

My sister is a bridesmaid in my cousin Kristin’s wedding, and I’m the only bridesmaid/matron of honor in my sister’s wedding, so there’s a lot of stress involved for all of us. The inner-bridezilla has been unleashed at times, and even I am starting to get into a frenzy about how I’m actually going to fit into the size 2 dress that I ordered a year ago. When all that stress starts to build up, it’s time for a bachelorette party!

My cousin’s bachelorette party is taking place next weekend but sadly, I won’t be able to make it because it’s JP’s actual birthday. He is lucky that I dedicate an entire week towards celebrating his birthday!

And my sister wasn’t all too interested in having a bachelorette party because this is her second marriage, but I was very surprised when I saw that this came in the mail for her today:

A promotional card for the Run or Dye 5-k. Jokingly, I asked her if she wanted to do it. And I was of course surprised (my sister is not a runner) when she seemed interested in it and actually asked when it was. I of course went into sisterly matron of honor mode and decided it would be a great opportunity to turn this into a bachelorette party. Not sure how my sister feels about this, but I’m taking the idea and running with it (literally).

This got me to thinking…if I were to have another bachelorette party again, this is what I would want to be on the agenda:

• A fun run, like Run or Dye, the Color Run, or Color Me Rad
• My bridal sash would be covered in color – how cool is that?!
• Then, we would have to have a post-run recovery snack (preferably ice cream)
• What better way to clean off all that color than by going to the beach afterwards (obviously the weather would be picture-perfect)?
• Instead of Mardi-Gras beads and naughty straws and earrings as party favors, each attendee would receive a pair of Mizuno Wave Riders filled with compression socks, and my new favorite brand of socks, My Soxy Feet.
• And after a day of fun-filled activities, everyone in attendance would get to bed early for a good night’s sleep so we can get up early the next morning and go for a long run (preferably on the beach, but it would be 60-degree weather, not too hot).

So, what do you think…do you want to come to my next bachelorette party? Let me know and I’ll add you to the list!

Tell me something that you’d want to have on your agenda for your ideal running-related bachelorette party.

7 thoughts on “A Bachelorette Party Fit for a Runner”