It’s officially Christmas Eve…and I am now officially a day late with my posts…but yesterday was a wonderful Christmas Eve Eve for me! I took a rest day, but still got a workout, nonetheless!

I started out my day by making myself some very tasteful apple pie protein waffles (recipe from Dashing Dish), before getting started on cleaning out my office in our house, because we still hadn’t put up our Christmas tree!
I took a before picture of my office, but I’m going to spare showing it to you until after I have it completely remodeled. Yeah, it was that bad. I don’t want anyone thinking I’m a slob or that I don’t clean (I’d rather be running)!

Unfortunately, it took me most of the day cleaning my office, and I did have to forgo my run a little bit, but managed to get a decent workout lugging boxes of books up into our attic (this was a much needed cleaning – we basically dumped everything that seemed like it belonged in the office in there, but then never really did anything else, like organize).

I finally managed to get the office nice and clean, but we didn’t have time to put the tree up because JP’s “company Christmas party” was tonight. He works with my dad and my sister, so this was essentially a family Christmas party with me, JP, my mom and dad, and my sister and her fiancé. We went to Publick House in Sturbridge, MA, which is a family tradition…we’ve been going there around the holidays since I was about 9 years old. Unfortunately, over the past couple of years, my parents were dealing with health issues over the holidays, and we didn’t get to go, which made it extra special for us this year. Everyone was healthy (for the most part). One of the things that I absolutely love about Publick House around re holidays is how much they decorate it. When we were young, it seemed magical, because they had a life-sized gingerbread house set up every year. Well, they still do, and this year, JP and I had our photo taken in front of it.

I wish the lighting was a little better, it’s a bit difficult to see the gingerbread house. We were also able to peak in the windows of it, where there were scenes of elves at work in it. After having our pictures taken, we were seated for dinner, which did not disappoint. I had filet mignon with a glass of Cabernet Sauvignon, mashed potatoes and asparagus, and for dessert, I enjoyed a chocolate hazelnut pyramid. Everything was ahhhmazing! I only wish I had thought to take pictures of the food, especially the chocolate hazelnut pyramid, which was like a chocolate mousse cake that was literally shaped like a pyramid with hazelnuts sauce drizzled over it. Yum!

On our way out of Publick House, we stopped to take some photos of all the decorations.

Santa Claus was on display in the loft over the stable area (the stable area is now converted into a dining area for functions, like bridal showers. Coincidentally, my bridal shower was at Publick House, but the room where mine was held is not in any of these photos).

They also had a Christmas tree on display in the main ballroom – I know I’m already married, but sometimes I fantasize about having a wedding here around Christmastime. It seems so romantic! 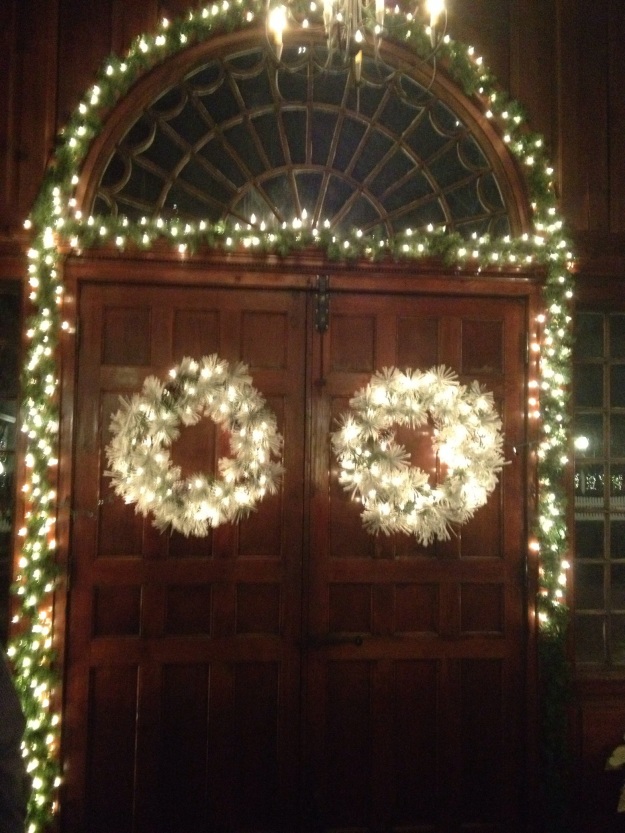 I loved how nicely they decorated the double doors in the stable area! After we returned home, we finally managed to get our Christmas tree up, with the presents under it! We haven’t gotten it decorated yet, but that’s usually a tradition that we save for Christmas Eve. We’ll have to save some images of the tree to share (hopefully) later on in the day, once it’s decorated.

In the meantime, have yourselves a merry little Christmas Eve!

2 thoughts on “Have Yourselves a Merry Little Christmas!”